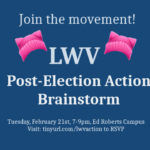 About 40 highly motivated new and potential members of the League of Women Voters of Berkeley Albany and Emeryville turned up the evening of Tuesday, Feb. 21 to our Action Brainstorm. In breakout sessions on  issues the group identified as urgent, “Making Democracy Work” attracted the biggest group  of participants. Health Care and a possible campaign for a single payer health insurance system in California attracted the next largest group. Immigration, Voting Rights, Housing, Prop 13 Reform and Climate Change were the other topics that concerned those attending the meeting.  Detailed Report will be posted soon.

To see Ruby MacDonald’s report on the discussions of the Reforming Prop. 13 group, click here.

Want to find out about and support the post-election action of the national and state League via quick emails, phone calls, postcards, or more?  Here’s how to do it.

To sign up for LWVCalifornia Action Alerts, go to  https://lwvc.org/stay-informed.

To sign up for LWVUS Action Alerts on specific areas and see recent Action Alerts, go to http://lwv.org/get-involved/