Alert to the mounting crisis posed by global warming, members of the League of Women Voters of Berkeley, Albany and Emeryville under the leadership of Diz Swift and Janice Blumenkrantz formed the LWVBAE Climate Team in 2007.  Addressing this subject of a scientific nature at the time was a pioneering departure from previous actions taken by a local League.  LWVCA and LWVUS, as well as many local Leagues, eventually joined in the by now worldwide effort to fight Climate Change.  Since 2007, the Climate Team has educated itself intensively on Climate Change and pursued the following strategies to engage citizens, government regulators, legislators, and elected leaders to take steps in meeting this challenge:

First:  The Climate Team partners with nonprofit climate organizations such as the Citizens Climate Lobby, the Sierra Club, 350.org and 350BayArea, the National Research Defense Council, EarthJustice, and the Berkeley Climate Action Coalition to organize forums to raise public awareness and understanding of climate change issues.   Meetings are organized, and local climate activists have been fortunate to hear some of the most well-known climate researchers, including those at nearby UC Berkeley and Stanford.

Second:  Climate Team members attend meetings of environmental regulatory and/or government agencies such as the local arm of the California Air Resources Board (CARB), the Bay Area Air Quality Management District (BAAQMD), the California Public Utilities Commission, and the Berkeley Energy Commission.  In addition to keeping abreast of the activities of these bodies, attendees are encouraged to make public comment about ongoing matters.

Third:  Climate Team members have also participated in lobbying the state legislature in Sacramento for bills supported by the LWV of California.  Meetings with legislators on Lobby Day that are organized by LWVC to inform them of LWV concerns is an important aspect of the lobbying effort.  Another lobbying effort of LWVBAE has involved making presentations on Climate Change at state and national conventions of LWV to convention goers.

Finally:  The LWVBAE participates in electrification fairs and other public events put on by the City of Berkeley and other organizations to explain actions that people can take such as the electrification of houses and cars.  The LWVBAE has written and assembled brochures on these actions. 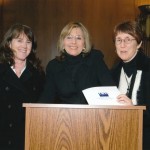 2007 Diz Swift (left) and Jan Blumenkrantz (right) with then Senator Barbara Boxer on a visit to Washington D.C. to lobby Congress for action on climate change.

Visit our other Teams.