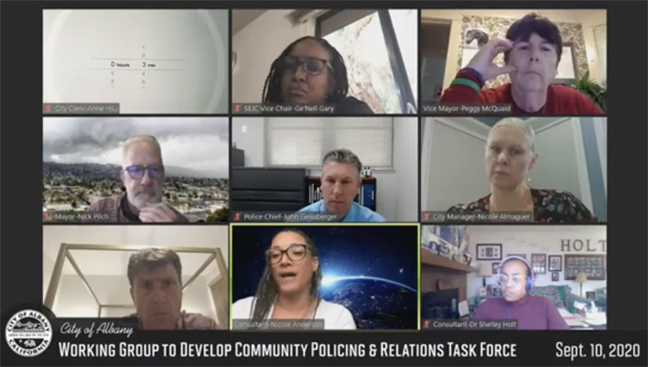 On September 10, 2020 an Albany working group held its third meeting to discuss the creation of the Albany Community Policing and Relations Task Force. The group first explored the issue of the Task Force’s size, with Albany Mayor Nick Pilch weighing the possible benefits and challenges of various “caps” on the number of Task Force members.

Ultimately, the working group deferred to the Albany City Council for a decision on the Task Force’s size. The group also finalized its plans for the Task Force’s appointment process, which would give Albany residents the option to submit an interest survey to be considered for membership on the Task Force. According to the groups’ current framework, Black, Indigeneous, and other people of color would be prioritized in the process of selecting community representatives for the Task Force.

At the meeting, Consultant Dr. Shelley Holt suggested that police representation on the Task Force would be essential.

“This [Task Force] has to be a sharing of ideas — it can’t just be the community arguing that a certain thing needs to happen,” Holt said. “But the Task Force also isn’t meant to pontificate about all the great things that Albany’s Police Department does. It has to be a conversation, and it can’t be adversarial.”

The group weighed various options for including police officers in the Task Force’s decision-making process. Multiple attendees recommended that the city add one or two interested members of the Police Officers Association to the Task Force.

The working group unanimously voted to confirm its written proposal for the creation of the Task Force, which will be sent to the Albany City Council for approval in the coming weeks.