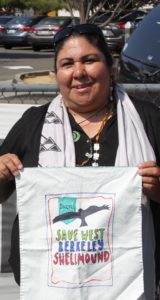 Before it was Berkeley or Emeryville it was Native American territory called Huchiun, and Lisjan Ohlone leader Corrina Gould is leading the Chochenyo Ohlone campaign to stop development on its sacred burial grounds discovered on the West Berkeley Shellmound on what is now Spenger’s Fresh Fish Grotto parking lot at 1900 Fourth Street. On land previously thought to be outside sacred grounds boundary, workers uncovered in 2016 what may be “pre-contact” Indian remains just across the street on the 1919 Fourth Street site, causing a halt to development. The 2.2-acre parcel was designated as a Berkeley City Landmark in 2000 and is eligible for the National Register 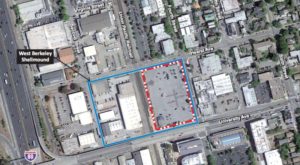 of Historic Places, Gould said. The West Berkeley Shellmound site may have contained two shellmounds, with the largest near Second and Hearst Streets but the surrounding village site is now believed to be bordered by Hearst Street on the North, University Avenue on the South, I-80 on the West, and Fifth Street on the East, with a satellite shellmound in the eastern portion of the site. Co-founder of Indian People Organizing for Change (IPOC), Gould presented an alternative vision that would preserve the 1900 Fourth Street site and create a 40-foot mound with a spiral walkway.

“We agree we need housing,” Gould said, but she added that the SB35 law invoked to fast track development makes their campaign urgent. “This village site represents something bigger,” she said. “It encompasses this place that needs to be protected and preserved.” It’s a funerary and ceremonial site, she emphasized. “We invite people to come and pray with us at this sacred place.” 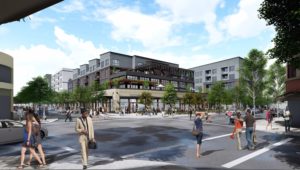 In March, a surprise move following years of contentious debate, developer West Berkeley Investors (WBI), a subsidiary of Danville-based Blake-Griggs Properties, was the first in California to invoke new state law SB35 (Wiener, D, SF) that allows residential builders streamlined approval to bypass local environmental review in exchange for making half the units affordable to households earning less than 80 percent of area median income ($80,400 for a family of four). The 260-unit mixed-use development complex would have some 27,000 square feet of stores and restaurants, a 7,000 square-foot park, community center, and a multi-level parking a garage. The over-the-counter approval process for zoning-compliant projects is aimed to encourage affordable housing, which is needed in Berkeley. SB35 requires the City to approve the project within 180 days if the planning department qualifies it under SB35. Developers sought Ohlone approval of alternate plans to include fewer housing units, most recently offering the Ohlone one-quarter of the property in exchange for their endorsement, an offer the latter rejected according to the Blake-Griggs website.

Ohlone spokesman Vincent Medina told the San Francisco Chronicle: “Our sacred sites were never given up by our families — not legally, nor in theory. They are not properties or parcel numbers that can be bought and sold. We did not stand in opposition when you developed other parts of our land. We do not get in the way when you put up apartment buildings or shopping malls. But where we draw the line is when you propose to dig up and desecrate the most sacred places where our ancestors are buried.”

A Draft Environmental Impact Report (DEIR) on the proposed development generated some 1,800 comments opposed to the development and five comments in favor, two by the project’s lawyers, according to the Ohlone Shellmound website sacredland.org. 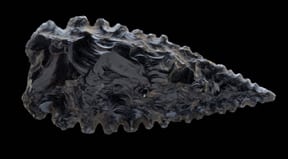 Chochenyo-speaking Ohlone Indians lived in West Berkeley from about 3700 BCE to 800 CE. Their diet included abundant shellfish and they discarded shells and other materials into mounds where they buried their dead. Gould said that 425 shellmounds used to ring the Bay Area. The Berkeley Shellmound is believed have been one of the largest, an area of 100 feet by 300 feet along Strawberry Creek. UC Berkeley archeologists in the 1950s removed some 3,500 artifacts and 95 skeletons from the mound. “West Berkeley Shellmound was two stories high,” Gould said. “It was the place where humans first fished and lived and raised their children. This is a very important place not just for Ohlone people but for anybody who lives in our territory.” 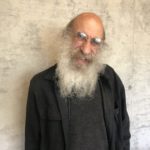 Heyday Books founder and author Malcolm Margolin spoke in support of Shellmound preservation. “It has a story… it’s a story of the history of Berkeley… it’s a story you have to know,” he said. Margolin is author-editor of The Ohlone Way: Indian Life in the San Francisco-Monterey Bay Area, named by the San Francisco Chronicle as one of the hundred most important books of the 20th century by a Western writer. At Heyday Margolin also oversaw publication of quarterly magazines, News from Native California, devoted to the history and ongoing concerns of California Indians, and Bay Nature, devoted to the natural history of the Bay Area.

Gould said the call for action is urgent. The League of Women Voters has not taken a formal position on this issue, but individuals who wish to support West Berkeley Shellmound preservation should call or email Timothy Burroughs, City of Berkeley Planning Department at tburroughs@cityofberkeley.info with cc: to attorney@cityofberkeley.info.

“We have an obligation to take care of our property,” Gould said. “By being able to access our sacred places, it helps us to create a better world for all people.”

For more information or a draft letter to the planning department contact Carol Stone at seastone11@hotmail.com or gail.schickele@gmail.com