Schools and Communities First! (SCF), the campaign to pass a state constitutional amendment protecting the Prop. 13 homeowner provisions – but closing its unintended commercial property tax loophole – is off to a rousing start! A leaders’ core training in Oakland Mar. 30 and a senior citizens’ training in Richmond Apr. 8 each drew more than 50 attendees eager to help reform Prop. 13 by passing the SCF ballot measure in Nov. 2020. 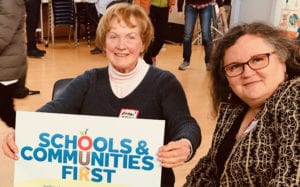 At the St. Mary’s Center in downtown Oakland on March 30, an enthusiastic group of supporters representing Evolve, the League of Women Voters, and Oakland Community Organizations, as well as other groups, began training to go out into the world with our top messages about the tax reform proposition:

Through speakers, breakout groups, and role-playing exercises, the participants were preparing to become battle-ready for the Nov. 2020 election (just 20 months away) when the SCF proposition will be on the ballot ! 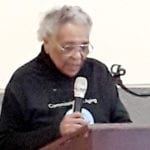 In the Bermuda Room of the Richmond Auditorium on April 8, a coalition of the California Alliance for Retired Americans (CARA), Evolve, and the Richmond Coalition on Aging (RCOA) presented a spirited program of energizing and organizing outreach on Prop. 13 issues. CARA Director Jodi Reid, Evolve Spokesperson Ben Grieff, and RCOA leader Myrtle Braxton took turns offering strategies for inspiring enthusiasm and addressing questions and concerns of the audience.

Anyone can do their bit to help pass SCF and obtain much needed revenue for schools and communities by signing the petition asking Governor Newsom to lead on this important issue for all Californians.