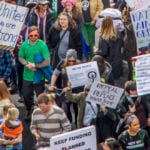 “Fight Truth Decay!” on one sign was the overall message in many forms at the 3rd Oakland Women’s March Saturday, Jan. 19, beginning at Lake Merritt and ending at Ogawa Plaza. Though not close to the 60 to 70,000 who attended the 2017 march, according to Oakland police, the crowd included 8,000 – 10,000 enthusiastic women, men and children brandishing many homemade, as well as commercially produced, signs, wearing pussy hats of pink and other colors and clad in t-shirts bearing slogans or identifying logos. Among the latter were the League of Women Voters LWV t-shirts worn by LWVBAE member Eloise Bodine and LWVWCC member Bob MacDonald and Oakland League members led by President Louise Rothman-Reimer proudly hoisting their LWVO banner.
As in the last two Oakland Women’s Marches, the diversity of the marchers’ lifestyles was especially notable and seemed to boost everyone’s spirits. In spite of concerns that antagonisms previously reported in the media might surface, the crowd warmly cheered and applauded speakers representing a variety of groups including native Americans, other minorities and religious faiths, as well as students. Congresswoman Barbara Lee, as usual, was especially well received. And although rain had fallen before the event, the appearance of the sun and welcome warmth seemed a favorable omen for hopes of the marchers for various progressive goals they are working towards.