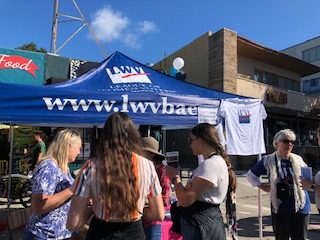 Energetic League volunteers like Climate Team leader Janice Blumenkrantz drew Strollers to our eye-catching, blue-and-white tent (see photo) at the ever popular Solano Stroll Sunday, Sept. 8. Rather than focusing only on voter registration, Leaguers took the opportunity to get-out-the-vote for 2020 (GOTV) with flyers on hot issues like criminal justice reform, Prop. 13 reform, Census 2020, Climate protection, and LWVBAE’s new “Face the Future” Speaker Series beginning with City Auditor Jenny Wong on Sept. 22, 2-4 pm, at Berkeley Central Library, Kittredge and Shattuck.
Although advocacy was in the air with determined activists of all stripes vying for attention, the morning parade of Albany, Berkeley and even El Cerrito fire trucks, police vehicles, and elected officials – along with families including children resplendent in colorful costumes – set the tone for a relaxed atmosphere. Adding to the carnival mood were vendors of attractive wares and good eats, wandering foodistas doling out free, tasty morsels, and a playground of inflatable bouncers and other rides.
You might keep this great event in mind for next year!