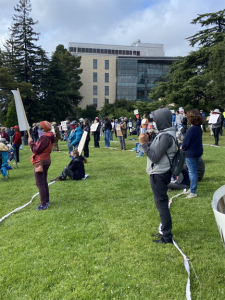 A Berkeley group of up to 250 silent, masked, socially distanced protestors – LWVBAE members among them – deserves a shout-out for peacefully and safely protesting in public in solidarity with people of color! Since the beginning of June, the nameless, ad hoc group has been standing in semi-circles marked by cloth strips, 6 feet apart on the lawn at the west edge of the UC Berkeley campus above the intersection of University and Oxford.
Volunteer organizers of the Friday, 5 – 6 pm vigils have explained that the assembled neighbors, book club members, exercise groups, students and friends are joining spontaneously, but peacefully, in “a nationwide public expression of outrage…to reiterate the message that ‘Black Lives Matter’”. It’s a welcome change in demonstrating — typically conducted these days in a high decibel, in-your-face style, which often ends in public spaces being littered with unwelcome trash and sometimes, unfortunately, in belligerent physical actions.
Participants are encouraged to bring signs, preferably in black and red, and whatever supplies they will need during the vigil, but the area must be clean when they leave. The photo of a vigil taken at the end of June shows most protestors seem to be white though a few people of color can be seen, old as well as young and female as well as male. Messages on signs include “End the War on Black People”, “White Silence is Violence”, “I can’t breathe” and “Black Lives Matter”.