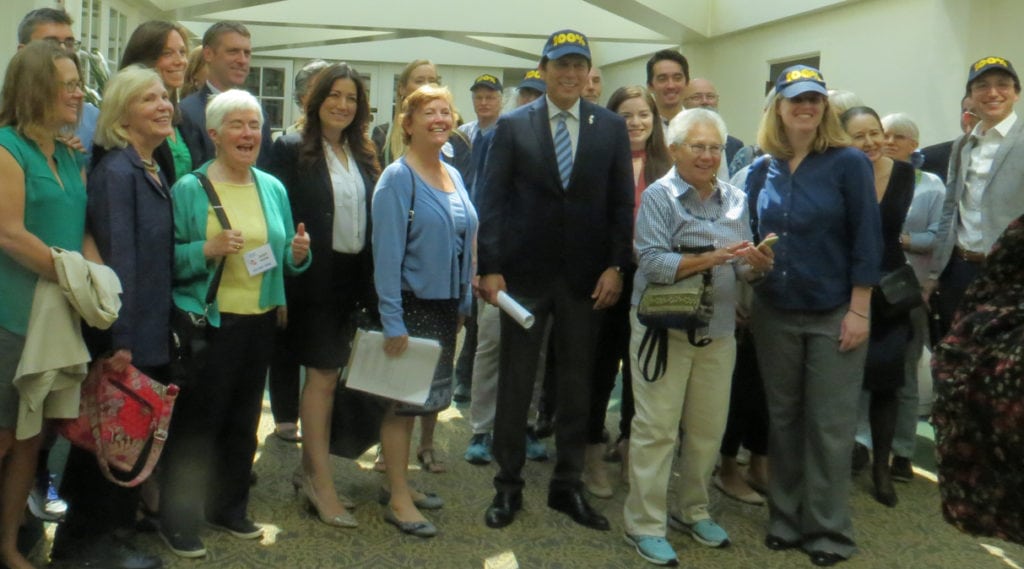 Sweet victory for Sen. Kevin De Leon (the man in the middle) and climate activists on passage of his bill SB100 by Utilities and Energy Committee of the State Assembly.

122 supporters returned to the State Capitol July 3 for the Assembly’s Utilities and Energy Committee Hearing for SB100 to quicken the pace to 100% electricity from renewable sources of energy by 2045. Thanks to recently made amendments of SB100 to enable the new target date of 2045 to be met by all stakeholders – utility and energy companies, workers, ratepayers – the bill passed 8 to 4 and now moves on to a vote in August by the entire Assembly and, if passed, to Governor Brown for his approval.
In two hours, the Committee heard from SB100’s author, Sen. Kevin De Leon, most of the Committee members and all 122 supporters and about 20 opponents of the bill. Because they were so numerous, supporters only identified themselves and their organizations and affirmed their support, as advised by Committee Chairman Chris Holden. A wide array of supporting organizations were represented — including environmental groups like Natural Resources Defense Council, 350 Bay Area, Fossil Free California, Sierra Club and Citizens’ Climate Lobby, the League of Women Voters of California, the League of Women Voters of Berkeley, Albany and Emeryville, the Union of Concerned Scientists, various unions and various religious groups – in addition to unaffiliated individuals. Some of the opposing groups included the California Chamber of Commerce, the Farm Bureau, small manufacturers’ groups, utilities and energy companies.
Although the vote would be crucial, unusual restraint was shown by everyone during the hearing until the vote was taken to indicate that SB100 had passed through the Committee, whereupon sustained and enthusiastic applause was heard. Relieved and happy supporters of SB100 posed outside the hearing room with an equally relieved and happy Sen. De Leon wearing his 100% baseball cap (see photo).