The Civics Education Team, under Civics Education Team Leader Ruby MacDonald, was successful at the January Program Planning in  proposing a new LWVBAE  effort to educate League members and the public about the benefits of Prop. 13 reform and to urge Local Leagues to take action by lobbying their legislators. Come to  the Jan. 11 Program Planning meeting to join the discussion.

In a recent meeting with former state Senator Loni Hancock, MacDonald and LWVBAE President Deborah Malbec discussed this proposal. Sen. Hancock encouraged MacDonald and Malbec’s proposal and gave them helpful advice. Sen. Hancock worked in the Legislature for many years to build a coalition to get Prop. 13 reform passed and spoke eloquently about the need for Prop. 13 reform at the 2015 League Community Luncheon, 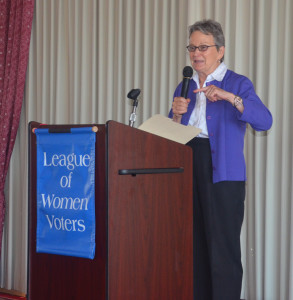 Proposed Education and Action: The Civics Education Team of LWVBAE will aim to educate communities and Leagues on the benefits of Prop. 13 Reform. The Team will also focus on carefully crafted outreach to local Leagues to mobilize their members to lobby their legislative representatives.

Goal: The current goal is passage of a state constitutional amendment requiring commercial and industrial property – but not residential property – to be reassessed every 7 years. This simple change would add about $9 billion in much needed revenue to the state’s General Fund, according to research by the Program for Environmental and Regional Equity (PERE) at USC.

Impacts of Prop 13: By severely limited the annual increase in property taxes, Proposition 13 has helped homeowners keep their properties.  At the same time, it has  caused unacceptable state and local budget deficits. Before Prop. 13, K-12 schools in California ranked 4th to 7th in the country. Today, they rank close to the bottom. Many cities and counties in the East Bay were forced to put tax measures or bonds on their ballots in the last election because infrastructure has decayed;  transit systems have aged;  affordable housing has been long neglected and not enough new affordable housing has been built to meet the growing need.

Students with low or moderate family income have less access  to higher education, as only students from upper income families can afford to attend UC Berkeley and other state institutions. Financial assistance to such students may not cover their actual need.

New Urgency: There is a newly urgent need to increase state revenue because Republicans have won control of the Presidency, Congress and the Senate. Thirty-six percent of the CA budget comes from federal sources. So increasing state income by reforming Prop. 13 will become essential to maintain and increase state income.

Unfairness of Taxes: The property taxes collected under Prop. 13 do not fall equally on all homeowners. Recently completed studies by the state Legislative Analysts’ Office show that Prop. 13 has benefited wealthier homeowners more than lower income and minority citizens.

For a more detailed discussion and background on Prop. 13 see: Prop.13 Backgrounder