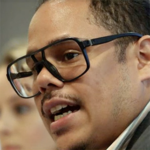 Hansel Aguilar joined this meeting with the purpose of introducing himself to the public and the Board members. He began by acknowledging, “I know as a public servant that just because you got the position doesn’t mean people necessarily trust you, and I know that I’m going to have to work for your trust.  I appreciate that you’ve given me this opportunity.” Aguilar also thanked the Board members for their work for the city and their kindness towards him. He said he would aim to ensure Board members have the equipment and tools and resources they need to do their work.

Aguilar stated that he is finishing up his doctoral degree at George Mason University. He completed a few years of policing on campus, investigated police misconduct at their Office of Police Complaints for a few years, and is finishing his term as the first executive director of a similar law enforcement oversight agency for the city of Charlottesville, Virginia. Aguilar said he will formally start his position remotely on October 24th, and will begin in person right after Thanksgiving.

Police Accountability Investigator Beneba Thomas brought up an issue involving the sharing of new Berkeley Police Department (BPD) policies to the Board for review. This year, the BPD has issued 41 new Lexipol policies from January to October, Thomas said, that had been distributed only to the previous Interim Director of Police Accountability, Katherine Lee, and Thomas. She said that although these policies had been distributed to her, she had never received them, and she believed that Director Lee hadn’t shared them with the Board as they had been preoccupied with other pressing matters earlier this year. Due to this, the PAB had no idea of these policies’ existence, and hadn’t reviewed any of them.

Berkeley Police Officer Michael Durbin said that it was his understanding that these policies had been sent to the Board, and therefore had been implemented almost immediately. The previous police oversight body, the Police Review Commission, was given 30 days between receiving the policies for review and their implementation.

Thomas said that since Board members hadn’t had access to the policies, she would forward them to all members. There was a consensus among the Board that restarting the Lexipol subcommittee was of great importance because it would allow them to formally review these and other future policies introduced by the BPD. Board members said that due to the Brown Act, this action will have to be taken at the next meeting.

“Going forward, I don’t care about the past, what I really care about is in the future, is there going to be an informal agreement that they send them to us before implementation so we can actually provide feedback. To me that seems to be necessary for the spirit of true collaboration,” Board Member Ismail Ramsey requested. Officer Durbin agreed.

Ramsey requested that a link to the PRC website archive be available on the PAB website, to resolve issues related to the public viewing old agendas, minutes, and reports. Members agreed, but weren’t sure if this would be possible. Vice Chair Nathan Mizell and Member Cheryl Owens reminded the Board that there has been a citywide issue of accessing commission and board archives. Mizell suggested bringing this request to Council.

The Board then discussed the interview process for the Berkeley Chief of Police that occurred on Thursday, October 6th. Mizell believed that the process had gone well, given the City Manager’s office had accommodated their request to have Board Members Deborah Levine and Juliet Leftwich attend through Zoom, while Chair John Moore and Mizell were able to attend in person.

“The interviews that the four board members participated in were very worthwhile. We articulated some very good suggestions, and it was made very clear by the City Manager to us that she would be interviewing these three candidates again, and that she would formulate all the questions and make all the decisions,” Levine said. “She did voice her intent to keep in mind what we said. It’s very clear that she holds that power exclusively and exercises it in whichever way she determines best.”

The Board said that the three finalists are going to be interviewed by the City Manager, and she will select the most qualified candidate. They stated that they were unaware of the timeline.

The meeting concluded shortly after Leftwich suggested that the Board hold some sort of social event for members to build stronger connections. Most of the members of the Board had not met in person before, and the new Director had just joined the team as well. “People who know each other work together better”, she stated. “Just so we can see each other, shake each other’s hands, share a drink. We could [also] at some point do something with the [Berkeley Police] Department, with the Chief– There’s been a lot of tension, and I think that tension would be alleviated if we met some of these folks in person and just got to know each other as people,” she added. Members Mizell, Regina Harris, Kitty Calavita, and Levine agreed. Thomas and Leftwich said they would work together outside of PAB meetings to create some proposals to host these events.