Ora Huth, a past president of both the League of Women Voters of Berkeley in 1965-66 and one of the founders and a past president of the League of Women Voters of the Bay Area, died in Woodland Hills, CA on June 22, 2022, four months after her 100th birthday.  As a fifty year plus League member, LWVBAE honored her at its 2017 Annual Meeting [see photo below with bouquet] when she was 96. At the meeting, Ora said that she had joined the League in 1957 and that she had attended all the League annual meetings since she joined. 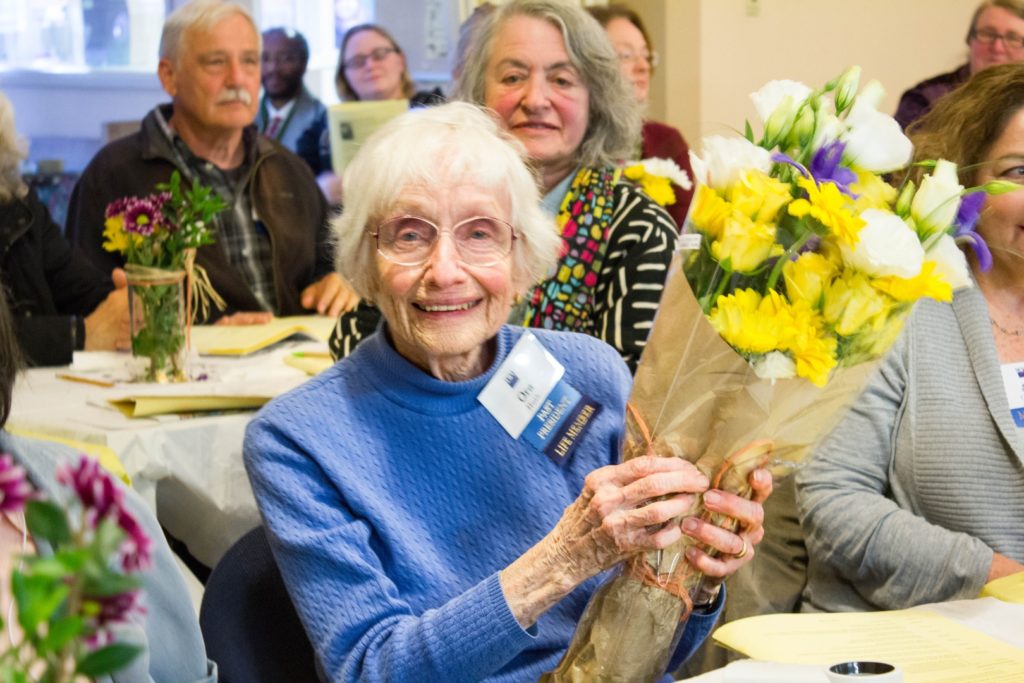 Ora Huth receiving flowers at the Annual Meeting May 2017.

In a San Francisco Chronicle’s July 4, 2022 obituary, Ora is described as “a dedicated community activist, historian, and artist, and a devoted wife, mother, and grandmother.”  Many  past League presidents and active League members remember her gracious manner and sharp wits.  Eloise Bodine recalls that Ora, along with members from many other Bay Area Leagues, founded the Bay Area League in 1960.

On the 75th Anniversary of LWV, LWVBA hosted the traveling LWVUS exhibit a Mills College and added our own regional information. Ora and her husband Kurt Huth were tireless researchers who put together the outstanding panels for the exhibit, recalls Leslie Stewart, herself active for many years with LWVBA.

Ora, like several other Leaguers, worked at the University of California Institute for Governmental Studies and at the  Regional Oral History Office, where she was a research associate and author of texts of governance and California history, including oral history accounts of the history of Kaiser Permanente Medical Care Program and “Berlin Banker to California Numismatist.” She served in the Marine Corps during World War II, taught art in the Vallejo Unified School District  and was a chair of the Berkeley Waterfront Commission.

Pat Kuhi has warm and vivid memories of Ora. “I remember Ora as a fellow Off-Board Program Director for the League of Women Voters of California. We often drove to Sacramento for  LWVC lobbying day.  Those she lobbied highly respected her. I was very fond of her. She was a close friend. She grew up in Sacramento. Her mother worked for the State, so Ora grew up very familiar with the Capitol buildings and aspired from an early age to work somehow in government. We shared so many attitudes: about our work, the League, and issues of the day.”

Sherry Smith recalls her as the “very definition of a gentlewoman” and regards the League as “very lucky that she centered her civic interest around it.”

The Chronicle obituary reports that her husband Kurt and daughter Marlene and sister Grace Elson predeceased her. Ora is survived by her daughter Carol Huth Amberg of Calabasas and her husband John, grandsons David of Los Angles and Julian of Seattle and a niece and sister-in-law. [See the SFGate obituary at legacy.com for more details of Ora’s life.]