Waiting to speak before City Council. Darin Cline of PG&E Gov relations (far right). He indicated that PG&E approved the ban. California gas lines are among the oldest in the country. No use replacing them in new buildings.

On July 16, the City Council of Berkeley voted unanimously to pass a ban on natural gas in most new buildings. The League, which supported the ban, was thanked by Mayor Jesse Arreguin for its support and service to the community.

The ban makes Berkeley the first city in the country to ban natural gas in new homes. It was put forward by Councilwoman Kate Harrison and council co-sponsors Cheryl Davila, Ben Bartlett, and Sophie Hahn. On the 16th, Councilwoman Harrison gave a presentation about the ban. The presentation was met with undivided support followed by a unanimous vote by all present, including members of the public and representatives of the University of California’s Office of the President (UCOP), PG&E, the Sierra Club, Rocky Mt. Institute, the California Energy Commission, and of course the League of Women Voters of Berkeley, Albany, and Emeryville (LWVBAE). 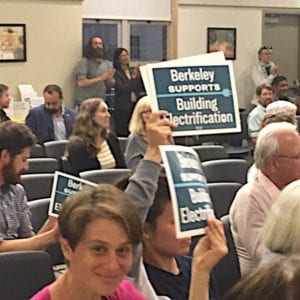 Rachel Golden and other members of the Sierra Club supporting the Gas Ban.

Beginning January 1, 2020, natural gas pipes will no longer be allowed in new buildings, except for in buildings where “it is not physically feasible to construct the building” otherwise. However, these new construction projects must have the capacity to convert to all-electric in the future.

Exempt from the ban are projects that the City’s zoning adjustments board or planning staff determine are in the public interest. Also exempt are internal accessory dwelling units (housing units installed inside an already existing home).

At current rates, despite steady efforts, the City is 18% behind its 2020 Climate Action Plan goal and will fall short of the ultimate goal of net zero emissions by 2050. California also has a state mandate in place to get to 100% clean energy by 2045. As declared by Harrison, more “drastic” changes such as electrification are necessary to realize these goals.

This sentiment is shared by LWVBAE Climate Change Team member Candace Hyde-Wang, who submitted a statement to the Berkeley City Council a few days prior in support of the ban. She also spoke at the City Council meeting, both as a League representative and real estate agent. 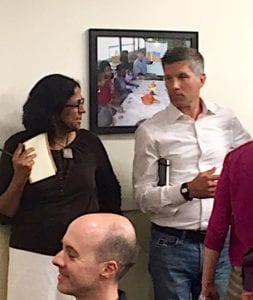 Shuba Raghavan (right) of the Energy and Resources group at UC Berkeley & the Rocky Mountain Inst.

“We are in a climate emergency and need bold action fast to reduce global warming, including prohibiting the use of natural gas.  We urge you to approve this forward-looking initiative to affirm Berkeley’s leadership in climate action,” Hyde-Wang firmly asserted in the statement, which was well received by the City of Berkeley – the League was later thanked by the Mayor.

California has been a national leader in renewable energy and energy efficiency. However, as Hyde-Wang explained in a written statement to the Climate Change Team, investments in energy upgrades have not significantly reduced emissions because building energy use analyses never considered the greenhouse gas emissions of buildings.

“Gas extraction processes and transmission lines leak so much methane that any attempt at savings is dwarfed… energy upgrading can be short-lived and is very difficult to do well,” Hyde-Wang wrote. She then articulated the urgency of terminating natural gas usage due to its role in global warming, and suggested that the solution lies in the transition to a clean energy grid that can power infrastructure and transportation.

In addition to the ban on natural gas, Berkeley is also instituting a “reach code” scheduled for September. This code will require new installations to compare electric and gas with penalties for greenhouse gas production. Albany is also planning an electrification ordinance which the League hopes to support. The League is proud that the region continues to lead not only the state but also the country in combatting climate change.