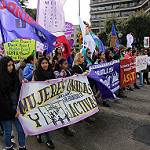 The new Immigration Team meets Thursday, April 6, at 10:30 am in the League office, Suite F,  at 2530 San Pablo Ave, between Dwight and Blake, .  Free parking can be found on the streets below San Pablo Ave and often in the Bank of America parking lot.

Want to join, but time is bad for you? Please let Deborah Malbec, president@lwvbae.org, know. The Team was started by interested members at the post-election Brainstorm Meeting Feb. 21, but turnout at the March meeting was small. The Team will only continue if enough members want to work on the issue. The League is its members.

Below are some notes from the February meeting and some background information.

Promote reunification of immediate families; meet the economic, business and employment needs of the United States; be responsive to those facing political persecution or humanitarian crises; and provide for student visas. Ensure fair treatment under the law for all persons. In transition to a reformed system, support provisions for unauthorized immigrants already in the country to earn legal status.

From the ACLU statement on IMMIGRANTS’ RIGHTS

The fundamental constitutional protections of due process and equal protection embodied in our Constitution and Bill of Rights apply to every person, regardless of immigration status.

WHAT YOU NEED TO KNOW

Immigrants vs safety : fight with facts and education

Farm laborers are not the problem

Facts about value of immigrants

Educating the public on real data to combat fear