Kandea has served as the Director for Diversity, Equity, Inclusion & Social Media for about four years. She has structured the League’s internship program for high school and college students, encouraging them to take on important projects and report on them in online articles. She has a MBA in Sustainable Global Enterprise from the Johnson School of Management at Cornell University and a BA in African American Studies with a Philosophy Concentration from UCLA. Her career has primarily been in nonprofit and social enterprise management where she has received awards for outstanding service and achievement. Kandea ardently believes in the League’s mission to create a more just, equitable society by actively promoting and building democratic participation.

Voter Services
Adena Ishii has been involved with the League since 2010. In 2014, she was honored with the Spirit of the League Award for her work connecting students with opportunities for civic engagement. Adena also served as the youngest and first woman of color to be President of our League from 2017-2019. During her time as President, she pushed for more paid staff to support our work; pioneered our new internship program; and worked to create a more diverse, inclusive, and equitable organization. She currently serves as a liaison to the LWV California State Equity Task Force.
adena@lwvbae.org

Criminal Justice
Christine Wenrich has been a member of the local LWV for many years. She has a BS & MA in Special Education and worked with the SFUSD schools. After retiring, she took on the role of LWVBAE Secretary, followed by that of Archivist. As Archivist, organizing the work of BAE from as far back as the 80’s was awesome. She joined the newly formed Criminal Justice Team that grew from concerns expressed at the 2017 LWVC Convention. As Leader of the Criminal Justice Team, she plans are to continue monitoring policing. 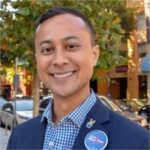 Greg Magofna currently serves as Director of Development and Outreach for the California Renters Legal Advocacy and Education Fund, making sure cities build the amount of housing they are currently zoned for and that cities follow state laws to build housing in a balanced way that prevents displacement, gentrification, sprawl, and the loss of green space. Previously, he was the Digital Marketing and Communications Manager at BOSS, Building Opportunities for Self-Sufficiency, an organization that works with and for homeless, formerly incarcerated, and/or low-income populations. In addition, he is one of the co-founders and Co-Executives of the social equity nonprofit East Bay for Everyone. Greg has a Master of Urban Planning from the USC Sol Price School of Public Policy and a BA in Political Science from UC Berkeley.

Want to send a message to the President and the whole Board?
Email 2021board@lwvbae.org.