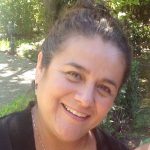 She’s come a long way! A California Chicana who’s become a vital community leader, Lupe Gallegos-Diaz grew up in the unincorporated area of Redwood City where her aunt Enriqueta Rincon, an immigrant from Mexico City, established a Mexican restaurant in the early 1950’s. The eldest of five, Lupe helped at the restaurant and was encouraged by her parents to be active in the community. As part of a family prominent in its local Latino community, Lupe was mentored from a young age by role models who nurtured what appears to have been her innate gift for leadership. A first generation and low-income student, Lupe entered Santa Clara University to major in Sociology and begin acquiring the varied academic background advantageous for her becoming a mentor of young Latinos, as well as those of other ethnicities. In addition to her Sociology degree, she later earned degrees in development at the U. of San Francisco; a Masters in Social work in administration and planning and a Certificate of Philosophy in Ethnic studies at UC Berkeley.

Living through the political turmoil of the California landscape — punctuated by racially motivated Prop. 187 in 1994 to deny immigrants social services they had earned with their often back-breaking labor, Prop. 227 as recently as 1998 to effectively outlaw use of any language but English in public schools, and Prop. 209 in 1996 to prohibit use of affirmative action policies or programs to increase diversity in public education, employment and awarding of government contracts — has complemented Lupe’s formal education with an empathetic knowledge of minority struggles and a thirst for social justice.

Consequently, her experiences and qualifications have led to her playing many different teaching roles in the 30+ years she has been on the Berkeley campus where she is currently the Director of the Chicanx Latinx Student Development office. Her workload off campus includes leading Latinx Unidos de Berkeley, a community-based organization advocating for political, economic, social and public health needs of members, as well as recently becoming the President of the Chicana Latina Foundation, a high profile Bay Area advocacy group.

Asked about changes she has seen over the years in the variety of challenges faced by her advisees, Lupe expressed special concern about the currently increasing isolation they feel because so much of human interaction has moved on-line in response to COVID-19, “Our students are resilient but we need to keep continuing to build community amongst all of us to show unity and solidarity during these challenging times.” It has been the good fortune of LWVBAE to partner with Latinx Unidos de Berkeley, led by a savvy and experienced leader like Lupe Gallegos-Diaz to boost Latinx voter registration and getting out the vote for the coming election. Beyond Nov. 3 we hope to continue our fruitful collaboration based on our common aspirations of equality and justice for all. Be on the lookout for an upcoming LWVBAE event featuring Lupe!