Representatives of the LWVBAE and other event co-sponsors were seated snugly at long tables for the packed, festive breakfast to mark this year’s theme, “United Against Hate, Working for Economic Justice.”

Donald Frazier from Building Opportunities for Self–Sufficiency discussed the history of institutionalized discrimination that systematically impoverished people of color in the United States, leading to intergenerational poverty that remains with us today. He added that these forms of injustice are evidenced right here at home in Alameda County, where poverty rates reflect this painful legacy.

“Imagine something beyond the system we have,” Frazier said, imploring community members to become allies and fight against the appalling lack of courage that sustains the status quo.

After everyone helped themselves to frittata, fruit, muffins and cream cheese wrapped in salmon among other delicacies, they returned to their seats to hear speakers engage in prayers and reference Dr. Martin Luther King’s desire for a national Poor People’s Campaign that would result in robust employment opportunities, decent housing, and an end to crippling poverty.

In the spirit of the iconic Civil Rights trailblazer, local leaders spoke of the need to collectively fight for an equitable, just society by bringing all voices to the table to develop fresh ideas. 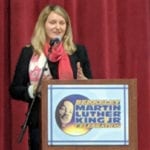 Assemblywoman Buffy Wicks and Berkeley Mayor JessArreguín said we must confront root causes of inequality if we ever want to create meaningful change.

“Dr. King said I think it’s necessary for us to realize that we’ve moved from an era of civil rights to an era of human rights, where we see there must be a radical redistribution of economic and political power…,” Arreguín began, ”In short, we’ve moved into an era when we are called upon to raise certain basic questions about the whole society,” he continued, quoting King.

“Now more than ever we must work together to create a beloved community,” he said, in reference to King’s expansive vision of a just society King termed a “beloved community.”

The breakfast – which included a performance by the group, Young, Gifted and Black –  came to a close with a celebration of youth who were awarded “Next Generation Awards.” Notable nonprofits received “Community Action Awards,” including the nonprofit PICO California that invited attendees to join in the hard work of building genuine relationships with people from different backgrounds to create a better, healthier and more just Berkeley.