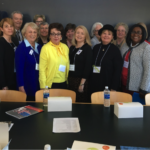 Last week we launched our opposition to the congressional healthcare plan which would revoke coverage for millions of Americans while dangerously raising costs for millions more. Meanwhile, I attended a redistricting convening at Duke University, moderating an expert panel discussion on gerrymandering.

League activists are leading the fight on redistricting reform nationwide, speaking out to improve voting access and holding elected leaders accountable when they try to restrict the vote. We’re stepping up our voter engagement for 2017 and 2018 elections, with plans to register young people at more than 200 high schools and community colleges nationwide this spring and thousands of New Americans at more than 500 citizenship ceremonies this year.

Finally, I want to share the news that Director Anita Loch has resigned from the national Board. We are grateful for Anita’s dedication to LWV and the tremendous value she added to the work of LWVUS/EF. We extend our thanks to Anita and wish her all the best.

News of the Week
Women’s history month continues to shine a light on our wonderful members and the important work the League does including our commitment to voting rights and the patriotic work of registering new citizens to vote at naturalization ceremonies.

The League was outspoken in our opposition to the House Leadership’s proposed “American Health Care Act” which could have a devastating impact on Medicaid and cut coverage for women.

As our membership continues to grow, activists are looking to our organization to make their voices heard. Leagues are working to reduce barriers to voting and increase voter turnout in Hawaii, fighting voter ID laws in Iowa and Missouri, and facing extreme racial gerrymandering in Texas.
ADVOCACY

Take Action: Save Healthcare
The House has introduced its plan to replace the Affordable Care Act. The legislation has already moved through the Ways and Means and Energy and Commerce Committees. The American Health Care Act is un-American. It will increase costs for seniors and those with pre-existing conditions, while slashing assistance for lower-income households in obtaining coverage. It will also threaten the essential care that women need. Tell your Representative that means that there will be fewer people covered, weaker protections and higher costs for Americans.

League Joins Amicus in Maslenjak v. United States
The League joined an amicus in Maslenjak v. United States. The case will be argued at the U.S. Supreme Court on April 26, 2017. The brief argues that the Sixth Circuit’s holding—that any knowing false statement or omission can be grounds for denaturalization and criminal prosecution—would have dire consequences for naturalized citizens, significantly discourage lawful immigrants from seeking citizenship, and undermine a cornerstone of American society and values.

League Joins Letter in Opposition of ACA Repeal, Defunding of Planned Parenthood
The League joined women’s groups on a letter opposing the repeal of the Affordable Care Act (ACA) and defunding Planned Parenthood. The letter went to the majority and minority leaders in the U.S House and Senate.

League Calls on Senators to Oppose REINS and Midnight Rules Relief Act
The League joined letters to the U.S. Senate in opposition to the Regulations from the Executive in Need of Scrutiny (REINS) Act of 2017 and the Midnight Rules Relief Act. Under the REINS Act, no major regulation could take effect unless it is approved by both houses of Congress in a small window of time, making it impossible to protect the public by shutting down the entire regulatory system including attacks on the Clean Air Act, Clean Water Act, and many other consumer protection measures. The Midnight Rules Relief Act would amend the Congressional Review Act (CRA) to enable Congress to repeal many regulations at once by packaging them in a single resolution that would get expedited consideration and require only a majority of votes for passage in the Senate.

2016-2018 Impact on Issues Available
The League’s 2016-2018 guide to public policy positions is now available for download HERE. Those Leagues who wish to receive a printed copy may make a purchase on Amazon or download for Kindle.

Recording of Pricing Carbon Webinar Now Available Online
On February 21, the Price on Carbon Steering Committee hosted The Case for Pricing Carbon, featuring internationally renowned science historian and author, Dr. Naomi Oreskes. Dr. Oreskes explained the economics of carbon pricing and fielded a range of questions from the webinar audience. A recording of the webinar, together with slides and several handouts, is available on the Price on Carbon website here. If you would like to join the Price on Carbon network, please contact Eleanor Revelle at er@revelle.net.

Climate March April 29
The League is excited to participate in the 2017 People’s Climate March on April 29 in Washington, DC. We will march to advance solutions to the climate crisis and demand answer from members of Congress. If you are planning to attend the March in Washington, please let the League know by filling out this form: https://docs.google.com/forms/d/e/1FAIpQLSce_II3SUz10CHktqplNhYomlXTGgMwMfN0-tPzN4fONcnhDA/viewform?usp=sf_link
We hope to see you in DC on April 29 or at a Sister March! Questions may be directed to Emily Yost (eyost@lwv.org).

Annual Meeting Time: Ensure that your League’s Bylaws are Up-to-date
2016 LWVUS National Convention delegates approved amendments to Article III, Section 2 of the bylaws pertaining to Types of Membership. Requirements around voting membership in League were changed. As League policy requires consistency in the first three articles of the bylaws of all Leagues, this memorandum explains how state and local Leagues and ILOs should amend their own bylaws to reflect those of LWVUS. Each League board should review and approve the language. If your League has not yet done this, annual meeting time is a great time to make these updates. Because this is a conforming amendment, it is not necessary to bring this issue to all members.

Special Notifications: Please don’t reply to this message. For additional information, contact the individual listed or visit our websites: lwv.org and the League Management site. To help keep your members informed, consider forwarding this bi-weekly message. Want to sign up to receive this email? Let us know at database@lwv.org. Please note that this is an internal communication that provides both announcements and opportunities meant only for your members and League, as well as updates on important news and events.