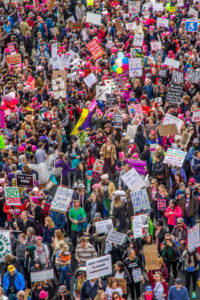 It has been a busy first month of 2018, and we’ve certainly seen some great victories in the voting rights sphere! We’re excited to share with you a few highlights of our January:

Our voting rights experienced a great victory at the beginning of this month, when President Trump (at long, long last) shut down his discredited ‘Election Integrity’ Commission. The League was involved in legal challenges in Texas, Utah and Indiana that sought to prevent the private data of voters in those states from being shared with the Commission. And, in the time the Commission was active, we collected more than 20,000 comments and petition signatures from those opposed to the Commission’s work. It is now time for our leaders to focus on the very real work of securing our elections against foreign interference, while making sure all eligible voters are free to exercise their right to vote.

The Supreme Court heard arguments in Husted v. A. Philip Randolph Institute (APRI), Ohio’s voter purge case. The League filed an amicus brief in support of the plaintiffs last year, stating it’s unreasonable, and therefore unlawful, to infer that a voter moved or is otherwise ineligible to vote from one missed federal election. We joined other voting rights advocates on the steps of the Supreme Court to say the right to vote is not use-it-or-lose-it. Learn more about the details of this case from Interim Senior Director of Advocacy, Jessica Jones Capparell, on The Union Edge.

Anti-Gerrymandering Wins Across the Nation

The League of North Carolina celebrated an exciting victory when courts struck down the state’s congressional districts as partisan gerrymanders and, just two weeks later, the Pennsylvania Supreme Court overturned the state’s gerrymandered congressional districts and ordered new maps to be drawn by February 9th. We are thrilled at the decision of the PA Supreme Court!

There are many more battles for fair maps happening nation-wide right now. The League of Michigan has joined in the fight against gerrymandering, where they have filed a lawsuit challenging partisan legislative and congressional district maps, and Leagues in Ohio may soon be seeing two anti-gerrymandering measures on the ballot.

After months of dedicated work,  Floridians have submitted more than 1.1M petitions in support of the Voting Restoration Amendment. Election officials in the state certified that this initiative has now collected enough signatures to get a constitutional amendment on the November ballot. Florida is currently one of four states that permanently revokes the right to vote from those with a felony conviction—affecting more than 1.5M people in Florida alone. The League of Florida has been working along with many partners to make sure these citizens who have paid their debt to society are restored with their right to vote. Learn more about the Second Chances Florida Campaign here.

It’s been a great start to 2018 and we’re excited to see what all we can accomplish together through the rest of this year. Thanks to your support, we continue to be vigilant in our mission to empower voters!