Millions of people participated in the global youth-led climate strike from September 20th to the 27th that League interns joined by attending a strike in San Francisco on the 20th.

“The future of climate change on Earth is directly interlaced with the future of humankind, and it is absolutely vital that those with power begin to address it more seriously,” said Communications Intern Karanina Zim.

In order to attend the climate summit, Thunberg, who avoids airplanes because they are a major source of carbon emissions, travelled to New York from Plymouth, England via a two-week journey on an emission-free sailboat, arriving in late August.

At the summit, Greta delivered a passionate speech, accusing the world leaders present of stealing her dreams and childhood.

“This is all wrong. I shouldn’t be standing here. I should be back in school on the other side of the ocean,” Thunberg said to begin her speech.

In the same spirit, the strike had kicked off three days prior with youth from all over the world skipping school to strike. 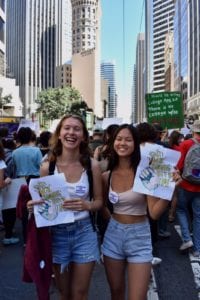 Our intern Sierra deCarion on the left.

For our interns, this meant arriving in San Francisco at 10 AM and then joining around 8,000 people, youth and adults alike, along a route down Market Street. The march began at the federal building and ended at Embarcadero Plaza, passing the offices of Bank of America, PG&E, and ICE along the way. The crowd chanted and touted signs as they marched.

It was a powerful experience for the interns, who consider climate change an important topic, especially in politics.

“It was empowering for me to see everybody united, fighting for systematic change to protect the environment,” Action Team Intern Sienna DeCarion said.

As the weeklong strike drew to a close, the interns looked towards the future. They hoped that the strike would have a lasting impact and inspire quantifiable change in policy.

“I am proud of us for stepping up and making waves, and hope it was enough for those with significant influence over the environment to reconsider their ways. Either way, we will continue to fight for the environment,” Zim said.

You can take action by demanding legislators to vote affirmative on legislation that will combat the plastic waste crisis here (http://www.congressweb.com/LWVofCA/29/).

According to the League of Women Voters of California, “Our dependence on single-use plastics is poisoning our state. Plastic production is a major source of global greenhouse gas emissions, floating plastic ‘islands’ are clogging the oceans, and microplastics are increasingly contaminating our food and drinking water sources.”

Less than 15% of single-use plastic is recycled in California, and this amount will decrease in the near future because China recently passed legislation restricting the amount of foreign waste it accepts. California taxpayers and local governments spend $420 million annually in cleaning up and preventing litter.

In the spirit of the strike and the ongoing fight, stay tuned for more news about local action you can take in the community!