The LWVBAE Officers and Board for 2017-18 elected at the Annual Meeting on May 11 will begin their terms July 1. The new officers will be: Adena Ishii, President, Christine Wenrich, Secretary, and Emily Beckhusen, Treasurer.  The six Board Members will be: Ken Bukowski, Phyllis Gale, Jinky Gardner, Preston Jordan, Jessica Powell and Diz Swift.  The Board will include six members and officers who were elected to and served on the 2016-17 Board.  Jessica Powell was appointed to the Board this spring.  Ken Bukowski and Adena Ishii will be new to the Board.

Most of the nominated slate of officers and six board members were elected by unanimous voice vote of the members at the meeting. League Member Bill Chapman nominated Adena Ishii for President in response to a call for nominees from the floor, a regular feature of every annual meeting. Adena Ishii is a member and current membership growth consultant for LWVBAE.

The election for president was carried out by paper ballot. Before members cast their ballots, each of the candidates had an opportunity to speak for about three minutes and respond to several questions from the floor. Adena Ishii received 34 votes; Deborah Malbec, current President and slate nominee, received 24 votes. Ms. Ishii had announced her intention to run for president through floor nomination in a letter to the League Board on April 12. 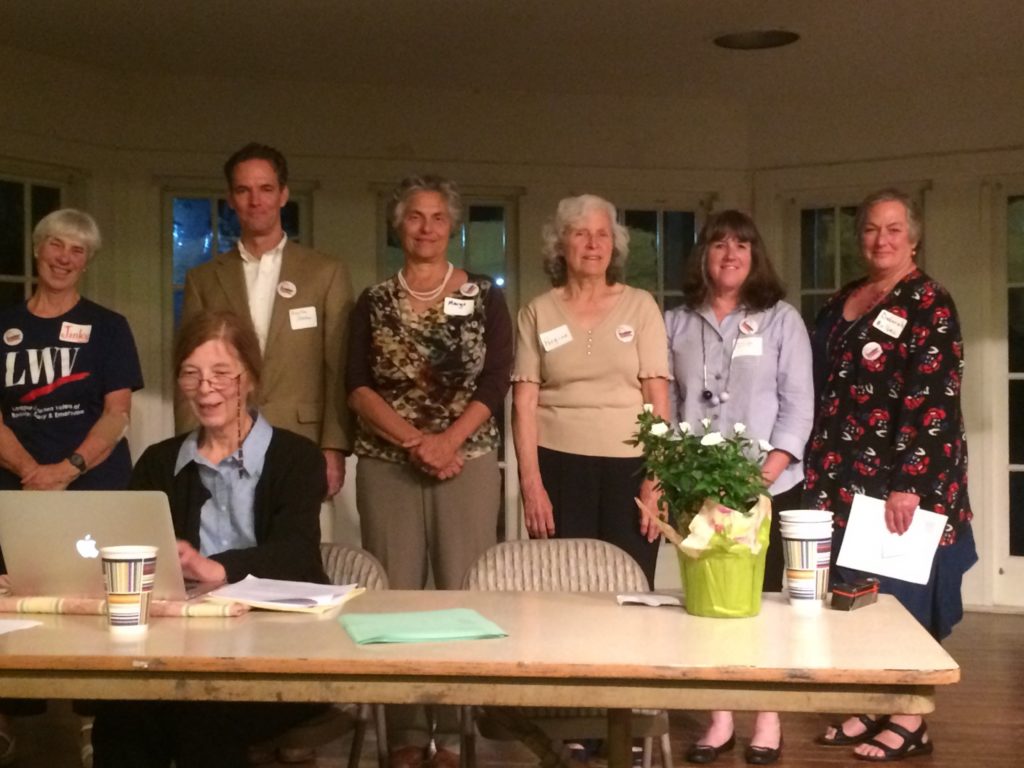 Current President Deborah Malbec will  complete her  term at the end of June, after leading the League through a demanding and successful year of expanding voter services and membership growth. Although many of the current Board members have been elected to serve on the 2017-18 Board, Regina Beatus will also complete her Board term at the end of June. Margo Schueler resigned shortly after the 2016 meeting when photo above was taken. [For the report of League accomplishments in the 2016-17 League year see related League article.]

To learn more about each of the newly elected officers and board members, please read the short bios published in the 2017 Annual Meeting Kit here. [link to be supplied.] Adena Ishii’s will be found in the bios of the proposed 2017-18 Nominating Committee.  Deborah Malbec also provided an introduction to the Kit.

See neighboring articles for further reports on the Annual Meeting.