To begin the meeting, attendees shared updates on quarantine life. Director Kandea and Melina both reported that they had embarked on missions to quit coffee, though Melina was finding it difficult to do so during finals week. The other attendees expressed their admiration at the notion of even attempting such a daunting task.

“People who give up coffee are brave,” Communications Director Linda declared, amazed. “This is a traumatic time and not a time to do excessive things like give up coffee or change your life.” 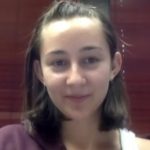 Melina then briefed attendees on her college experience so far.

“To miss it shows that I have had a really great experience so far,” Melina reflected. “Being appreciative of my personal liberty carried me through the year,” she said, explaining that college has enabled her to further explore her passions and interests.

The meeting then transitioned into an icebreaker, with attendees sharing something trivial they were looking forward to once the shelter-in-place order is lifted. Everyone looked forward to being able to give and receive hugs freely. Melina and Communications Intern Laszlo missed visiting coffee shops, both agreeing that cafes are the best study spots.

Director Kandea missed taking carefree, leisurely strolls, saying “I look forward to just being outside for no particular reason, meandering about with no concern as to where I’m walking or who’s on the block approaching me.”

“It’s a really cool resource in general and I’ve always had a sort of fascination with BART and AC Transit because there’s so many people in the Bay Area,” said Schools and Communities First! Intern Cameron. “It’s such an equalizer.”

Finally, President Ruby delivered a comprehensive presentation on the state budget and the League’s involvement with the annual budgeting process, emphasizing the significance of properly interpreting statistics.

She outlined the yearly process, drawing connections to trends and important events such as the passing of Proposition 13, and reporting predictions for the post-COVID state economy.

“Legislators are super happy to have public interests involved in Sacramento… they really value that kind of input,” President Ruby noted. She explained that the League reviews thousands of bills each year to possibly support, and then writes advocacy letters to the State for those they endorse. “It’s important that we, as the army of the League, understand the budgeting process also,” President Ruby concluded.