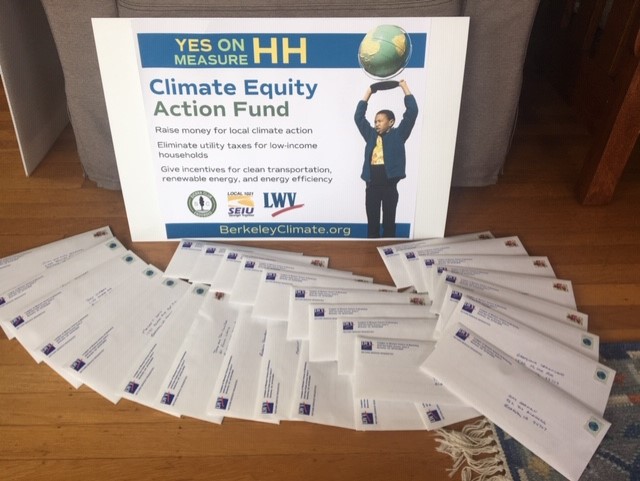 Have your Measure HH/DD flyers arrived in the mail? Packets of Measure HH/DD flyers were recently mailed to LWVBAE members following the new Advocacy-During-Pandemics strategy (!) carried out by members of the Climate Team under the leadership of Eric Arens in partnership with 350 East Bay headed by Kathy Dervin. Volunteers assembled packets from kits delivered to their homes containing envelopes, stamps, a letter of directions, a list of members’ names and addresses, and flyers urging support for HH and DD to be distributed to recipients’ family, friends and neighbors. Mailing of packets to LWVBAE members from homes of Climate Team volunteers was the last step of the sheltered-in-place process to get-out-the-vote for Measures HH/DD to set-up a fund for Climate Actions in Berkeley and Albany, respectively, so that more than lofty statements about Climate Action can be expected in future.

HH will increase the Utility Users’ Tax on gas and electricity from a 7.5 to 10% increase in gas and electricity taxes — representing an average $53/year paid by households — whereas DD, besides increasing Albany’s Utility User’s Tax on gas and electricity from 7 to 9.5 %, will add a UU Tax on water of 7%. Both Measures HH and DD will exempt low-income residents. Although revenues raised in these ways will reside in the General Funds of both cities and, hence, enable HH and DD to pass by a majority, instead of two-thirds, vote, recent experience with the Berkeley Sugar Tax shows that these funds are, in fact, spent on the purposes the voters were led to expect.

All that remains to be done is for anxious Climate Activists to shout out “Go, HH and DD!”