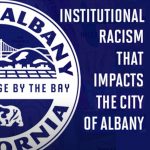 On Thursday, July 16, the City of Albany held a community dialogue to discuss institutional racism. Over 200 participants packed the Zoom event to join the conversation.

Nicole Anderson (CEO and Founder) and Dr. Shelley Holt of Nicole Anderson and Associates Consulting, LLC moderated the discussion. The meeting was hosted by Dr. Greg Downs (Chair) and Ge’Nell Gary (Vice Chair) of the Albany Social & Economic Justice Commission (SEJC), an “advisory body appointed by the City Council to make recommendations on issues of justice so the council can act,” according to Downs.

Downs kicked off the meeting by acknowledging the Ohlone land Albany lies on. He then reviewed the context of the meeting, noting the widespread public response to the murder of George Floyd and the upsurge of the Black Lives Matter movement nationally and globally. He commented on local engagement in the form of public participation in “vast numbers” in emails, town halls, and public meetings. According to Downs, many community members believed that the city has not examined systematic racism, particularly in hiring, housing, business development, schooling, and policing (policies, oversight, and budget).

With “400 years of work to undo,” the hosts and moderators emphasized that the day’s discussion would be part of an ongoing dialogue “to work together to develop a Racial Equity Impact plan to make tangible change in Albany towards addressing institutional racism.”

Downs explained that the city would proceed with formulating an Equity Action Plan that would be presented as a recommendation to the Council beginning in September. The ideas presented by the public and the SEJC would be decided upon by the City Council and potentially appear on the ballot for voters.

Representing the Albany Police Department was Chief John Geissberger. In his introduction, he acknowledged the police department’s past of inequitable treatment of people of color. However, he insisted that such behavior was limited to past generations and attested to efforts in the past few decades to improve that reputation. He acknowledged the importance of constant evaluation and improvement, and noted that he has listened to comments at the Mayor’s town hall and the City Council and SEJC meetings.

Offering his perspective on police-community relations,  Geissberger stressed the importance of connecting with the youth “because they’re our future and we want them to feel comfortable coming to us.” He listed several programs, such as presentations given during the mandatory Identity, Health, and Society course for 9th graders and similar presentations at the middle school, and wrestling, basketball, and volleyball camps. He also described a youth corp program, a restorative justice program for first time juvenile offenders. The program, meant to “take [youth] out of the criminal justice system with creative solutions”, is run by juveniles with a youth jury and attorneys.

Then, Geissberger, Schoenfeld, and Atkins discussed services offered for community members with special needs, including disabilities and mental health needs. Schoenfeld reported that Neighborhood Services provides resources such as housing referrals; application, transportation, and legal aid; services for seniors and those with disabilities; medical, dental, and mental healthcare; bill payment assistance and much more. Project HOPE, a homeless outreach and engagement program in collaboration with the BFHP, includes mental health services. Atkins noted that the BFHP constantly utilizes data about underserved individuals to tailor and enhance services based on that data.

Geissberger explained that the police academy included training for special needs, but admitted that there weren’t many courses available once police officers are in the field. However, he also provided examples such as a crisis intervention training the entire department attended in 2018 and quarterly trainings that all concern de-escalation.

Finally, Geissberger answered a few miscellaneous questions about the police department. When asked how the police are actively and progressively fighting institutional racism, he answered that it was through a “culture of de-escalation” and the supervision of officers.

“It goes back to the very beginning of who we’re hiring and making sure we’re hiring people who are getting into this job for the right reason,” said Geissberger.

The Chief noted that data mining was a weak point for the department, but that they are making an effort to better utilize it. To promote deescalation, the officers carry tasers. Last year, the department also purchased a new device called a bola wrap.

The mic was then opened for public comment. This segment of the dialogue was filled with compelling anecdotes and calls for action from community members of many different backgrounds. Some members said they were reassured by the meeting, while others expressed disappointment – with one speaker saying they had been “offended” during the event.

Many supported the creation of a police oversight committee or commission, and multiple called for the defunding of police.

“This isn’t about attacking the police for its own sake; it’s about saying the police are being told to do too much and a lot of the things they do could be better done by other actors if we take those resources and redirect them to better serve the community,” said one caller.

After the public comment segment finished, the meeting wrapped up with the expectation that the dialogue would continue this Fall.