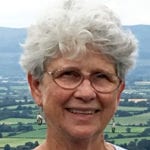 A talk regarding the non-profit, non-partisan, grass roots advocacy group Citizens’ Climate Lobby (CCL) was delivered by Trish Clifford on 10 Feb 2020 at the Belmont Village in Albany as part of the LWVBAE Environmental Concerns Speaker Series.

Clifford said there is scientific consensus on the existence of climate change and human activity being the main cause of its increase. Furthermore, Clifford indicated that, “the Intergovernmental Panel on Climate Change reports that we have 10 years to cut global emissions by 50%.” Citizens’ Climate Lobby aims to address these issues by focusing on quick, large scale change through national policies. One such solution the group advocates for is the Energy Innovation and Carbon Dividend Act (EIA). The Act proposes a charge on fossil fuels at the source and the resulting revenue would be returned to households as a net dividend with the intention of protecting middle and lower income families from rising prices resulting from the carbon charge and preventing the size of the government from growing, which would allow for bipartisan appeal. Per Clifford, the EIA would reduce carbon emissions by 40% over the next 12 years and 90% by 2050. Clifford also cited a statement made by Dr. Noah Kaufman, Director of the Carbon Tax Research Institute at Columbia University, indicating that studies suggest the carbon tax would have no impact on the growth of the US economy. In terms of the effect on California’s Cap & Trade Program, Clifford stated the EIA would not pre-empt any existing state level programs, rather, there would be synergy between state and national programs, so that both can run at the same time.

The CCL aims to use its network of 466 groups and 180,000 supporters across the country to advocate for an effective national policy. Last year, CCL volunteers participated in 4,752 community outreach events, gained 1,563 endorsements for the EIA from local leaders, created 4,700 mentions in media, and had 1,712 meetings with members of Congress and staff. For more information, the CCL Alameda Chapter website: CCLalameda.org