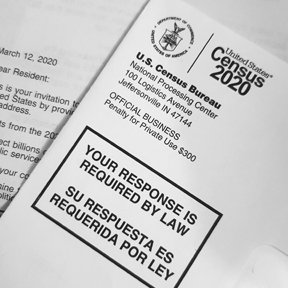 2020 Census response and field data collection are still in operation.
Cuts to the Census Service have threatened to undermine the census count. There is still an opportunity to complete your Census. https://my2020census.gov/

To ensure everyone is counted, be sure to get your Census paperwork postmarked by Oct. 31st and spread the word to neighbors!

The census first emerged in Ancient Rome. The census was a pivotal component of the success of the Roman Empire as it was used to determine taxation. Flash forward to 1790 and the first U.S. census was held. The original aim of the census was to accurately count the population for proportional representation in congress. As per Article I Section II of the Constitution of the United States, the census is to be conducted “every subsequent Term of ten Years”. The census captures a detailed snapshot of the demography of the United States and is used to inform policy decisions for the next decade. Filling out the census is immeasurably important as it enables the political processes that improve our daily lives to occur.

The ramifications of an inaccurate census include adverse policy decisions that will directly affect the American people for up to 10 years. The effects of inaccuracy will disproportionately affect marginalized communities that would stand to benefit the most from federal investment in public works programs, projects, and education. In June of 2020, the Supreme court ruled against the reinstatement of a question of citizenship in the 2020 census. The 5-4 ruling makes it safe and important for undocumented immigrants to participate in this year’s census count. Participation is especially important in populous states such as California with high numbers of undocumented residents.