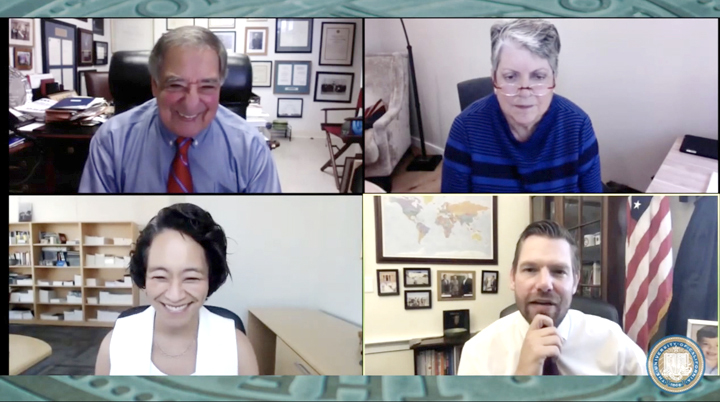 The discussion, led by former President of the University of California Janet Napolitano, featured three panelists with unique expertise in each branch of American government. Leon Panetta, former Secretary of Defense under President Obama, spoke as the panel’s resident expert on the executive branch. US Representative Eric Swalwell and Dean of the UC Irvine School of Law L. Song Richardson – the other two panelists – provided expertise in the congressional and judicial branches of government, respectively.

After briefly introducing each speaker, Napolitano opened the conversation with a description of the Trump administration’s norm-defying behavior.

“President Trump has fundamentally changed the presidency and the country,” Napolitano said. “He has exposed the presidency’s vulnerability to excesses of authority and weaknesses in accountability.”

The other panelists added to Napolitano’s description, each speaking from their own place of expertise.

Rep. Swalwell added that Republican congressional leaders seem unable to place checks on the President’s actions because they fear the prospect of “a mean tweet or a primary challenge.”

According to Secretary Panetta, unwritten rules and norms had been sufficient to prevent past Chief Executives from abusing the power of their office.

Panetta also argued that a lack of bipartisan cooperation among elected officials had contributed to the country’s polarization crisis.

Dean Richardson offered a political remedy to American democracy’s current state: the National Popular Vote Interstate Compact. The Interstate Compact is an agreement between consenting states to award their electoral college delegates to whichever presidential candidate wins the national popular vote. If a large enough number of states were to join the Compact, the electoral college system could be effectively circumvented in favor of a “winner by popular vote” system.

“Clearly, we have taken the strength of our democratic norms and institutions for granted, and we assumed that individuals would live up to them,” Richardson said. “I think that our current circumstances could be enough to push a majority of Americans towards enacting key democratic reforms like the national popular vote. These reforms need to be made in order to protect us from ourselves.”