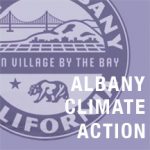 The Albany Climate Action Committee (CAC) held a regular meeting over Zoom on Wednesday, July 15 at 7:30 PM. The committee reviewed updates and discussed policy proposals in development, such as the Green Building Update and the Electric Vehicle Action Plan.

The meeting began with quick announcements including a COVID-19 update and a review of recent sustainability events and resources (such as rebates, incentives, and webinars offered by the Bay Area Regional Energy Network, BayREN, and information resource StopWaste.org). This was followed by an East Bay Community Energy (EBCE) update, reviewing budget changes recently approved by the EBCE Board. 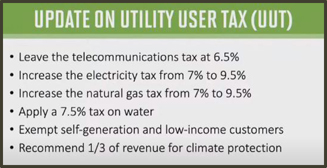 The final announcement was for the Utility User Tax (UUT). After “strong” lobbying by the CAC via council meetings and letters, the City Council had approved a tax measure for the November ballot that increases some utility user taxes, including the electricity and natural gas taxes. A majority of the final ballot language aligned directly with the CAC’s recommendation to Council.

The Council discussed the Green Building Update. These green building requirements, originally proposed by the Building Subcommittee, were presented by staff to the CAC. After being initially approved by the CAC, staff brought the requirements to the Community Development and the Planning and Zoning Commission for feedback. The Green Building Update was brought back to the CAC for the July 15 for final review before being recommended to City Council.

Non-energy efficiency measures are listed below. (These measures are explained in greater detail in the May Memo.)

Suggestions from staff and the Planning and Zoning Commission included removing requirements for electrical panel upgrades and permeable paving and requiring relevant residential measures to be applied to accessory dwelling units (ADUs).

Staff recommended removing the electrical panel upgrade requirement (that when existing panels are upgraded, a 200 amp panel must be installed) due to it being a “one size fits all measure” that would not suit the “different needs” of the “variety of houses in Albany.” Multiple members of council expressed a desire to revisit the original proposed requirement in the future, considering it a crucial “step towards electrification,” and possibly make it work by integrating exceptions, for example a cost exemption for those experiencing economic hardships, as suggested by the PNZ.

The permeable paving requirement, which would require permeable paving to be 30% of the paved area for a home in order to reduce runoff and emissions, was recommended to be removed by staff and the PNZ due to its projected limited impact in Albany, where it would be ineffective in significantly reducing runoff due to Albany’s clay soils.

Multiple members of the CAC were reluctant to remove these requirements; in the interest of time the Green Building Update was pushed to be revisited in September.

To read the updates in full detail, see the May Memo and July Memo here. The May Memo details the original proposal as developed by the CAC, with an in-depth explanation of each measure, and the July Memo reports the staff and PZC feedback. 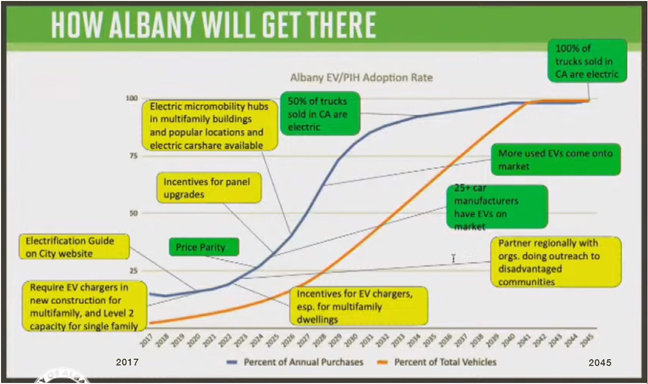 The above graphic was displayed to illustrate the goals set by the Electric Vehicle Action Plan, with yellow boxes representing Albany-specific actions and green boxes representing external actions that would influence EV adoption rates. Key checkpoints include 35% EV adoption, 64% by 2035, and 100% by 2045.

Some members pushed for more aggressive goals, promoting a steeper line earlier on, because the adoption of EVs would not necessarily mean ICEs would not remain on the roads, especially those purchased in the final years before the percentage of annual EV purchases reaches 100. The item was pushed for reconsideration of the model.

To read about the Electric Vehicle Action Plan in more detail, see its July Memo .

Finally, everything was summed up in a CivicSpark Update and Climate Action and Adaptation Plan Quarterly Update.

Members were encouraged to participate in future CAC meetings, as there are many opportunities for public comment. See the City of Albany calendar.

Watch a recording of the July 15 Meeting.