Plenary session in the grand ballroom

It was an honor to represent the Berkeley, Albany, Emeryville League (LWVBAE) at the 2018 League of Women Voters National Convention this June in Chicago, alongside our League delegates Linda “Diz” Swift, Christine Wenrich, and Ken Bukowski. I’m proud to share that our League was a finalist for the Community Connection Award for our work with Berkeley High School’s Vote16.

Convention is a busy four days of workshops, trainings, caucuses, and plenary sessions, where the National budget, priorities, and bylaws are re-confirmed and decided. You can find Convention highlights in the daily briefings on the LWVUS website.You can also check-out our tweets, and we will be following this report up with a podcast interview.

Because the highlights and outcomes of the Convention are well documented (see links above), I’d like to focus this report on some of my personal reflections, observations, and experiences:

Diversity, Equity, and Inclusion
As this was my third Convention and second National Convention, I prepared for the lack of diversity throughout the proceedings. 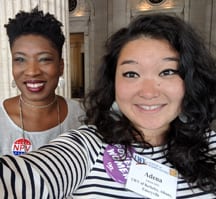 I experienced microaggressions, ignorant comments, and assumptions. I was mistaken for wait staff, and people took pictures of me to highlight the “diversity” of the League of Women Voters. The silver lining to this experience is that diversity, equity, and inclusion was a highlighted topic throughout the Convention. The training with Wellstone Action on organizing and mobilizing encouraged discussion around bringing everyone to the table and identifying barriers to entry for potential members. There was a panel on diversity; speakers, including Andy Kang from Advancing Justice Chicago, called on the League to reflect on who was present and who was not, and to reach out to communities that aren’t represented. We also had a three-hour training on Diversity, Equity, and Inclusion on Saturday. It is clear the National League understands the importance of diversity and is making an effort to prioritize increasing it.

These conversations are just the beginning. Given some of the questions and comments that I heard throughout Convention, we have a lot of work to do. Yet despite these disappointing observations, I have hope. The League of Women Voters of California is creating a task force to address diversity, equity, and inclusion. I hope that this task force will have something concrete to present at our California State Convention in 2019, and that their work will help shape the California Convention so Leaguers can continue these conversations on diversity, equity, and inclusion. On a local level, the LWVBAE 2018-2019 Board has created a Diversity Task Force. This change will take time, but we are on the right track. 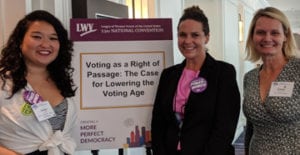 In San Francisco, a measure that would have allowed sixteen and seventeen year-olds to vote in municipal elections failed. The San Francisco League did not support the ballot measure, although it did educate the public on the issue. In Berkeley, Measure Y1 passed with over 70% of the vote, and now sixteen and seventeen year-olds are allowed to vote for school board elections under the Berkeley City Charter. The LWVBAE was proud to support the measure, although the Alameda County Registrar of Voters is still working out the legality of this change to the City Charter and the logistics around these youth actually voting. The LWVBAE has been heavily involved in the process, and we have been working with Berkeley High School’s Vote16 students for the last year on pre-registering and registering students to vote. We awarded the Vote16 students with our “Spirit of the League” Award at our Spring Celebration and Annual Meeting in May to recognize their work.

Although the attendance for the caucus was limited, our message was well received. Those who were neutral or skeptical were supportive of the idea by the end of the presentation.  I strongly believe we should be supporting these youth in their fight for representation. Many people argue that sixteen year olds are not educated enough to vote, and that they will just vote with their parents. When women fought for the right to vote, we were met with the same arguments. The League of Women Voters was created to register women and educate them on their rights and the issues. I see it as our job to assist youth in the same way. The “Vote16” movement is happening with or without the League. If young people are fighting for their right to be represented in our democracy, how can an organization that believes that “voting is a fundamental right that must be guaranteed” not support them?

National Context
To provide the backdrop for the Convention, President Trump’s Administration had recently announced it was ending the practice of separating children from their parents at the Mexico border, however, thousands of children had not been reunited with their parents. The change from separating children from their parents to imprisoning families together is still unacceptable. The National League wrote a joint letter with over 300 other organizations to protest the Federal Government’s immigration policies and encouraged Leagues to take part in local rallies. On Saturday, there was a rally that was planned for Chicago, and many participants wanted to attend. We ended plenary early, so that Leaguers could join in solidarity.

Despite the many situations that are causing hopelessness, fear, and anger around the country (rulings on gerrymandering and the “Muslim Ban,” fight for women’s right to choose, family separations at the border, etc.), we were reminded that hope is not lost. The work that local Leagues are accomplishing around the country is inspiring. Truly, organizing and mobilizing on a local level are essential to defending our democracy. This is not our toughest fight. As one of our speakers, Elaine Weiss, author of “The Woman’s Hour: The Great Fight to Win the Vote” reminded us, “Suffragists suffered imprisonment, force feeding, and torture to win the right to vote… They experienced many loses in the Supreme Court and the legislature. Do not let this week discourage you.” It is our job to “Defend Democracy.” We must remind ourselves that in a democracy, the power is with the people, and collectively we have the power to lead what happens in our communities and in our country.